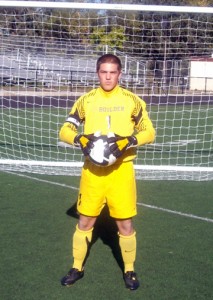 Two year varsity Co-Captain, Devin Kuh, has announced that he has commtted to play college soccer at Whitman College in Washinton. Devin will be looking to challenge right away for playing time. Whitman competes in the Northwest Conference and is an NCAA Division III program on the rise with a 2008 overall record of 11-2-7.

As Boulder High’s most honored goalkeeper in the program’s 29 year history, Devin was a four year varsity letter winner and three year varsity starter. Devin was well known in prep soccer throughout the state for his commanding pressence during games and exceptional leadership on and off the field. Devin set the Panther standard of excellence for hard work and commitment. Devin achieved his success in prep soccer working harder and pushing himself to be the best he could be — even when nobody else was looking. In 2008, Devin led all players in 212 Club points, BHS’s off-season preparation and commitment program. Devin was a two time All-Centennial League player, receiving the honor in his sophomore and junior years. In Devin’s senior year, when the program switch to the Front Range League, he joined a conference with several of the top prep goalkeepers in the Colorado. In the Front Range League, Devin still stood out as one of the top players and earned 1st Team All-League honors. Devin is the first BHS goalkeeper to receive Colorado All-State honors. Devin was a 2008 Daily Camera All-Region 1st Team selection. Devin was named the 2008 Goalkeeper MVP of Colorado’s most prestigious high school tournament, the Arapahoe Warriors Invitational. An excellent student, he was an Academic All-State First Team Selection, Student Body President, BHS Junior of the Year and Sophomore of the Year and is the announcer for BHS varsity girls home games.

Devin played his club soccer with the Boulder County Force soccer club from U9-U18. After Devin’s junior year he was invited to attend the Super Y League National ODP Camp in Florida — an invitation only camp for some of the top club soccer players in the US.

Devin will be joining former Fairview standout Jasper Lipton (’06) at Whitman. Also playing in the Norwestern Conference is former BHS Co-Captain and All-Conference player, Sean Rice (’08) who had an excellent freshman season at University Puget Sound.

Devin was also recruited by Tufts, Colorado College and  Macalaster .