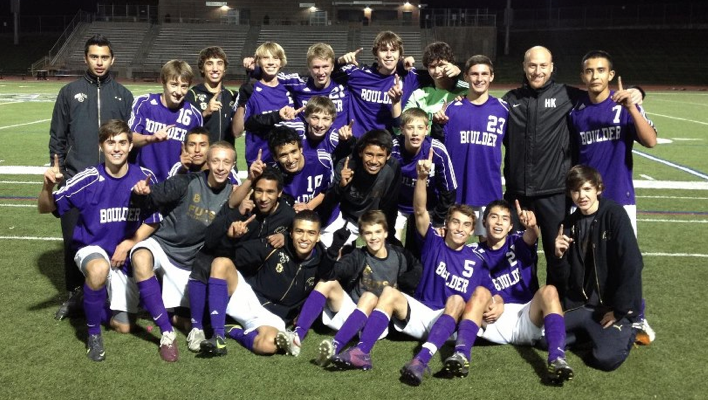 What a terrific game on Wednesday! #6 Boulder defeated #10 Fairview 1-0 in overtime at the Colorado 5A State Semi-Finals, earning Boulder’s first trip ever to the Colorado State Championship game. These young men played with poise, class and character and won with grace and respect for their opponent.

Thank you for supporting Boulder at the game. The Boulder High supporter are the envy of the Colorado high school soccer. Go Uber Fans! Your support helped give this team that extra boost! Now we ask for one more push from our supporters as we head into the 5A State Championship game.

The State Champion game is Saturday, November 10 versus #4 Smoky Hill inside the Colorado Rapids’ stadium at Dick’s Sporting Goods Park. Kick off is at 4:00PM.

After starting the 2012 season with a 2-5 record and the toughest out of conference schedule in Colorado, Boulder has won 11 or it last 12 games, was crowned Front Range League Champions for just the second time in 32 years and is on its best run ever in the Colorado State tournament. Most important, these young men are doing it the right way as a an example of sportsmanship and team spirit on and off the field.

Riding a wave of great team spirit and community support, Boulder High Boys Soccer, under the nickname “LA FAMILIA”, looks forward to playing its last game of the season for the State Championship with your continued support. Thank you.